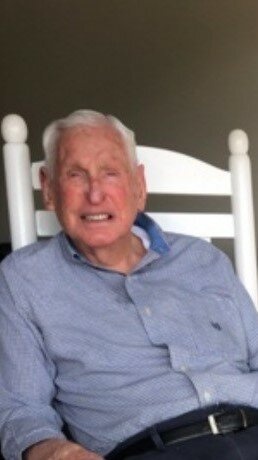 James Roy Wiginton, age 92, departed peacefully from this life following a brief illness Friday, December 31, 2021, at Sanctuary Hospice in Tupelo, Mississippi. James, as he was affectionately known to family and friends, was born January 15, 1929, in Tremont, MS, as one of six children to the late William R. and Laura Maud Wiginton. James was a veteran of the Korean War and a retired Major in the Mississippi National Guard. He was a dedicated educator and coach serving various school districts in Mississippi. James began his educational and coaching career in Agricola, MS. His first girls’ basketball team won 82 consecutive games and created a Mississippi High school public schools record that lasted over fifty years. He left education to work as a statistician for the Mississippi State Highway Department. Missing the opportunity to work as an educator, he returned to education as the supervising principal in Mendenhall, MS. He touched many lives including his three daughters, who all graduated from Mendenhall. He later served as an administrator in both Marks and Prentiss, MS. He was married to Fay Wiginton December 6, 1952. The two maintained an inseparable bond as a marriage institution for 69 years. During and after retirement, he maintained a constant presence at school and college events in support of family members. He always wanted everyone to do their best. His favorite quote, “Talk is cheap.”, will always be remembered by his children and grandchildren. As a devoted follower of Jesus Christ and member of Prentiss United Methodist Church, he was widely recognized as a Sunday school teacher. His enduring and boundless love for his children, grandchildren and great grandchildren served as an inspiration to all. In order to be nearer immediate family, James and Fay relocated to West Point within the past year. He is survived by three daughters Debbie (Michael) Caldwell, Brentwood, TN; Kay (Wayne) Rankin, Brandon, MS; and Gay (Chris) McBrayer, West Point, MS. He is also survived by six grandchildren Bryce (Nina) Caldwell, Greenville, SC; Lindsay (Seth) Argo, Nashville, TN; Hollie May Vanderford, Brandon, MS; Meg (Riley) Pierce, West Point, MS; Triston (Haley) Cowan, Brandon, MS; and Macon McBrayer, West Point, MS; nine great grandchildren including, Zoe Caldwell, Knoxville, TN; Atticus and Alden Caldwell, Greenville, SC; Issy, Oscar and Millie Argo, Nashville, TN; Aniston and Addie Cate Vanderford, Brandon, MS; Jaxon Cowan, Brandon, MS and multiple nieces and nephews. He was preceded in death by his wife Annie Fay Wiginton; parents William Roy and Laura Maud Wiginton: brothers B.D and Foy Wiginton; and sisters Mozelle Boaz, Marie Weeks and Mary Lou Dahl. A celebration of life service is planned for 2 PM Tuesday, January 4, 2022, at Robinson Funeral Home in West Point, MS. Visitation will be 1 PM until service time. DR. James Towery of West Point will officiate. A private graveside service will follow with military honors. The family requests memorials be made to Prentiss United Methodist Church in Prentiss, MS
To order memorial trees or send flowers to the family in memory of James Wiginton, please visit our flower store.