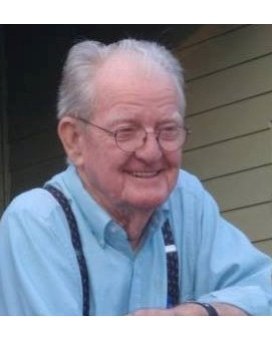 Jack Rowell passed away peacefully on Thursday, October 24, 2019, one day after his 99th birthday. Loving husband of the late Connie Lee Reyer Rowell, Jack is survived by two sons, Jim Rowell (Dianne) and Jeff Rowell (Polly), and by his brother, Ralph “Toonie” Rowell. A native of Mississippi, Jack served in the U.S. Coast Guard during WWII in the North Atlantic and Mediterranean theaters. After receiving an Honorable Discharge, he married the love of his life, Connie. Jack then completed watchmaker school, and he and Connie moved to West Point, Mississippi, where he established a jewelry store, Rowell Jewelers, and they raised their family. Jack was a master watchmaker and a Gemology Institute of America Certified Gemologist. He achieved the level of Master Mason in the Grand Lodge of Mississippi and was a Deacon of Calvary Baptist Church in West Point. Along the way, Jack studied for and was awarded an amateur radio license. Those who knew him in New Orleans may remember him at Jazzfest wearing a baseball cap bearing his ham radio call sign, WA5TWI. He spent many enjoyable hours talking over his radio with people throughout the world. Jack enjoyed his retirement in New Orleans and cherished the many friends he made here. He was the author of two books, “As I Remember” and “Some Other Things That I Remember”. Jack was a resident of the Atrium Assisted Living facility in Metairie, Louisiana. The family would like to thank Louisiana Hospice and Palliative Care, the staff of Atrium Assisted Living and especially his longtime, loyal caregiver, Ms. Carrie Lewis, for their compassionate and loving care of Jack. A funeral service will be held on Saturday, November 2, 2019 at JACOB SCHOEN & SON FUNERAL HOME, 3827 Canal Street, New Orleans, LA 70119. Visitation will begin at 10:00 a.m., followed by the funeral service at 12:30 p.m. Internment will be in West Point, Mississippi, where Jack will be laid to rest, as he wanted, next to his beloved Connie.

To order memorial trees or send flowers to the family in memory of Jack Rowell, please visit our flower store.